The global automotive market is getting more and more expanded with popular all-electric vehicles. Lately, the Volkswagen car maker is working on these types of cars and the last thing we could hear is that they are planning to surprise us with another member in the I.D. concept lineup. It will follow the previously revealed I.D. Buzz Concept and I.D. hatchback models. So, today we are talking about the VW I.D. Crozz electric SUV.

The upcoming Volkswagen I.D. Crozz Concept has recently been presented at the 2017 Shanghai Auto Show. It is an all-electric crossover SUV which rides on the Modular Electric Drive Matrix platform. As the matter of fact, the whole lineup of these electric vehicles rides on the same Volkswagen Group’s MEB architecture. As for the exterior, its design is clean and unique. Inside, it will offer the similar space as the upcoming Tiguan model. Technology will be on the high level and the new Crozz will receive a fully autonomous driving mode.

Like we have already mentioned, the VW I.D. Crozz electric SUV is all-electric vehicle. It is powered with two motors one on the front and the second on the rear axle. The front motor has the output of 101 horses while the rear one can make 201 hp. So, the total output of these motors is 302 horsepower. The lithium-ion battery of 83 kWh provides the range of 311 miles in one single charge. Furthermore, the battery can be charged to 80% in around 30 minutes with the fast charger. The all-wheel drive system is standard. The top speed of this electric crossover is claimed to be 112 mph.

The new VW I.D. Crozz electric SUV rides on the VW new EV MEB platform which proportionally makes it similar to the Volkswagen Tiguan model. It is 182.1 inches long, 74.4 inches wide and features a wheelbase of 109.2 inches. The interior will also offer the similar space as the Tiguan.

As for the exterior design, the Crozz model will look very attractive, futuristic and elegant. The front end is specific because it doesn’t have a grille. The LED headlamps are also very attractive and they move during the drive so it seems that they are looking at other vehicles on the road when it is in autonomous driving mode. Moreover, it has a sloping roofline which makes it look sportier. The Crozz crossover features four doors which are opened electrically. The front ones can swing for 90 degrees while the rear ones are sliding. 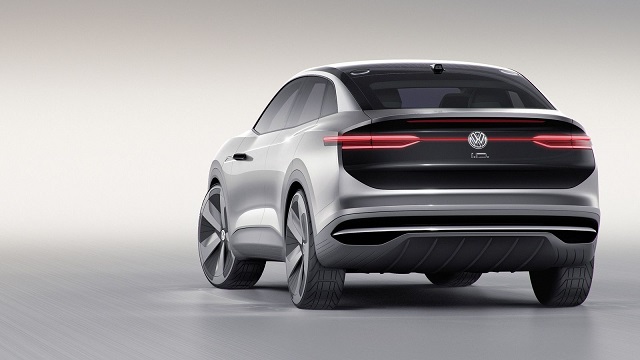 As for the interior, the VW I.D. Crozz electric SUV’s cabin looks very futuristic and modern and offers plenty of infotainment and safety features. The dashboard will receive a large 10.2-inch display. Furthermore, the Crozz will feature an I.D. Pilot- fully autonomous driving mode. It is activated when you press the VW’s logo on the steering wheel.

The VW I.D. Crozz electric SUV should go into production sometime in 2020. As for the pricing, the information is not available at this moment.