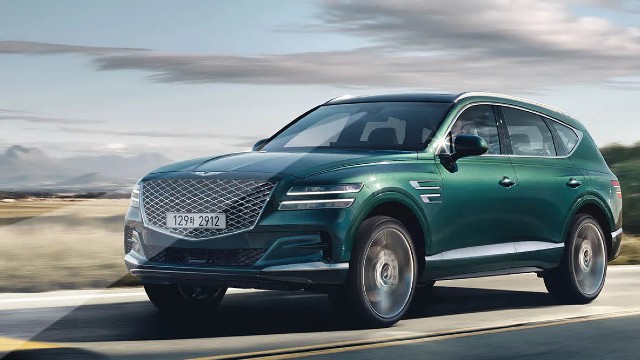 The forthcoming 2021 Genesis GV80 is going on sale this fall. This model was supposed to arrive a few weeks ago. The reason is the Coronavirus outbreak that delayed so many models. Besides GV80 SUV, a redesigned G80 sedan is also coming to the markets. Both models will start at around $50k, and they should represent a true refreshment in their respective segments.

The SUV version was firstly teased during the Super Bowl in a commercial featuring Chrissy Teigen and John Legend. As many of you expected, GV80 caused an instant splash in the automotive industry. Besides the teaser image, the latest spy photos are available. That means not all of the parts are available at the moment. However, we know more than enough about arriving SUV.

Newest spy shots were leaked on Instagram a few months ago. Thanks to that, we can see how the all-new Genesis GV80 looks so close to its original concept. Brand’s familiar design language is easy to spot, and the G80 variant will follow the same path. Transforming the concept into a production model is a huge task for every manufacturer in the world. From what we saw, the headlights are larger on the SUV version, and we are not surprised at all.

The front grille also looks bigger than on the concept. As for the overall vehicle’s appearance, the shape is the same, and even the dimensions won’t change. Some styling cues are exactly the same as on the G90 version. The rear part will host bigger taillights that are stretched into the quarter panels.

Surprisingly, but the same spy shots are also showing a couple of interior details. The 2021 Genesis GV80 offers a taller center console. Moreover, the center part separates the front seats, which is another familiar styling cue. Genesis opted for electronic dials, so shifting gears is even easier now. We like the round touchpad that hosts various buttons and controls.

The cabin is driver-oriented, and all of the controls are easy to use. The dash is simple, and it comes with the infotainment display. Upper trim levels are offering an all-digital instrument cluster that is so easy to configure. On the other hand, the base trim level comes with conventional analog gauges.

The next-gen G80 model is a perfect indication of what to expect from the 2021 Genesis GV80 SUV. Both models are mechanically similar. They are using the same rear-wheel-drive system, the same platform, and most likely, the same engine lineup. The GV80 SUV will at least borrow the V6 powertrain option.

It is the only choice for the first year of production with the more potent V8 waiting in line. On the other hand, GV80 could get some sort of electrification. A plug-in hybrid version is the most likely outcome. This variant will arrive later in 2021, and it will introduce a standard AWD setup.

As we said, the new 2021 Genesis GV80 SUV was supposed to arrive this summer. However, the COVID-19 outbreak forced Genesis and other automakers to reschedule their plans.