The next-generation 2020 Mercedes-Benz GLS has been spotted during the testing, and this time we expect some visual changes so as the upgrades inside the cabin. On the engine front, it will get some new units including a plug-in hybrid alongside the traditional engines. Furthermore, the technology will also be upgraded and it will offer self-driving systems as well.

Engines and performances of the 2020 Mercedes-Benz GLS

Beneath the hood of the 2020 Mercedes-Benz GLS will be placed several types of engines. However, this time the manufacturer should offer engines with mild-hybrid technology. The already familiar is a 3.0-liter V-6 turbocharged engine which is able to make 362 hp and 369 lb-ft of torque. It works with a 9-speed automatic and the all-wheel drive system is standard. It gets 17 mpg in the city and 22 mpg on the highway.

The next is a 4.7-liter V-8 twin-turbocharged unit. This engine is capable of producing 449 hp and 516 lb-ft of torque. It will also use the same 9-speed gearbox and standard AWD. As well, it is rated at 14 mpg in the city and 19 mpg on the highway. Furthermore, the range-topping GLS 63 will be powered by a 5.5-liter V-8 engine which will be able to make 577 horsepower. It will be coupled with a 7-speed automatic transmission. The all-wheel drive is also standard. This engine gets 13 mpg in the city, 18 mpg on the highway, and 15 mpg combined.

The new Mercedes GLS will also get a plug-in hybrid engine which will combine an inline-6 unit with electric motor and battery. The total output of this unit is expected to be more than 600 horsepower. Like the other engines in the range, this one should also get an AWD and a 9-speed automatic.

The new 2020 Mercedes-Benz GLS will ride on a stretched version of the MHA architecture made for Mercedes SUVs. And it is very similar to the MRA platform used in brand’s sedans and coupes and which first debuted in the GLC model. When it comes to exterior design, the 2020 Mercedes-Benz GLS will represent the next generation model. So we can expect some changes in styling. The front end will get a wide grille as before, LED headlights but they could be slightly refreshed for a more attractive look. Furthermore, the sportier models will ride on the 21-inch wheels. 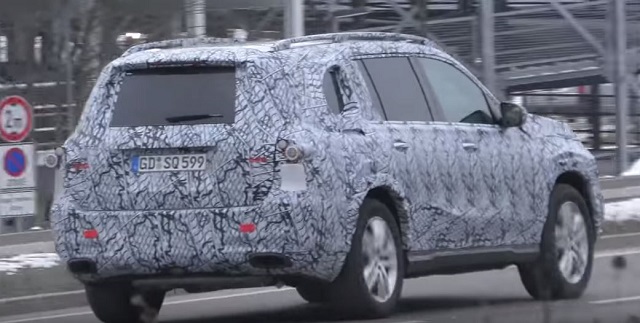 The interior might also be revised with some new equipment and color combinations. It will arrive standard with three rows of seats and will be able to welcome seven passengers. The standard equipment will include synthetic leather seats, power features, an 8.4-inch touchscreen for the infotainment system, automatic climate control, cruise control, remote start, a power driver seat, etc. It can be upgraded with power second-rows seats, cooled front seats, surround-view cameras, Bang & Olufsen audio, a trailer hitch, and so on. As well, it should get self-driving systems too.

The new 2020 Mercedes-Benz GLS should be presented next year. The pricing is not yet available but the price of the current starts at $70,150.