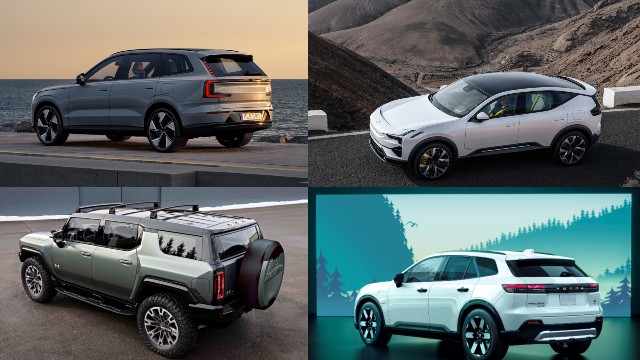 It seems that a lot of new SUVs are hitting the market recently. This is no surprise as this category of vehicles has become the most popular one. There are many vehicles in the segment and sometimes it can be difficult to discern which one is the best option. There are some compact options, big three-row SUVs as well.

Some still use traditional combustion engines, there are hybrid options while some made the jump to electric powertrains. There is a plethora of choices if you are looking for a good SUV. Here is a list of some of the top SUVs that are poised to hit the road quite soon.

This will be the second time Honda tried to dish out an EV. The clarity sedan didn’t do as well as expected. There is a partnership with General Motors. Honda hasn’t officially disclosed the Prologue’s price or trim levels, but we anticipate that the new car will start at roughly $45,000 and increase in price from there. Although we can expect to see Honda’s standard LX, EX, EX-L, and Touring trim levels, we won’t know which one will provide the greatest value until those details are made public.

The interior will resemble a Chevrolet. There will be an 11-inch touchscreen for infotainment. The wheelbase will be 8 inches longer than the CR-V’s and wider by 5 inches. This should improve the handling and stability of the upcoming SUV. This will be one more EV SUV that is announced. Many are bound to make a debut soon. It is expected to be a compact vehicle, not a three-row seater. As mentioned this will be an EV exclusively and no internal combustion engine will happen. 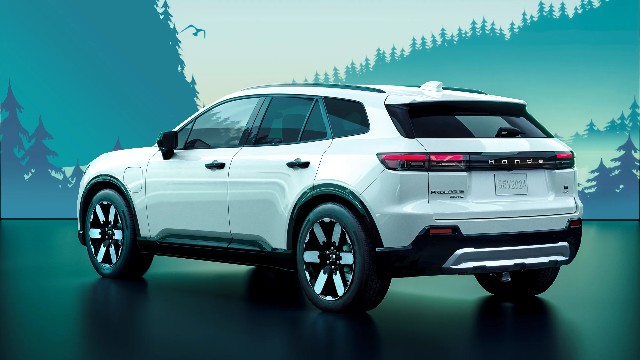 The 2024 GMC Hummer EV SUV is a fully electric redesign of one of the century’s most recognizable and fearsome off-road vehicles. Although the Hummer brand is now a part of the GMC lineup, its distinctive look and exceptional off-road characteristics are carefully preserved in EV form. The SUV’s cutting-edge technology, great power, and cutting-edge features, such as four-wheel steering, which enables the much-ballyhooed crab mode, will likely make the latter even more spectacular.

The Ultium battery technology, which offers fast charge times and a sizable battery pack with an expected range of 300+ miles, is the most intriguing feature of the redesigned Hummer. The interior will look identical to its pickup version, which is also electric. There will be a detachable roof for those sunny days. There will be several trims and each is more powerful than the previous. The SUV is already sold out so we will have to wait for the next wave of presales. The most expensive version is $105000 while the cheapest is $80000. 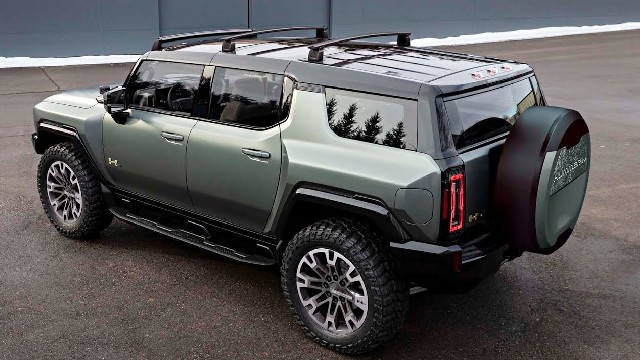 Acura is starting its transition to an electrical future by bringing back the ZDX moniker. The redesigned 2024 ZDX SUV is expected to have a more conventional two-box SUV shape, in contrast to the original ZDX, which made its debut way back in the 2010 model year with a fastback design that was maybe ahead of its time. The Precision EV Concept, which made its public premiere at Monterey Car Week in 2022, served as a preview of the future SUV. Interesting styling features include the concept’s hovering roof, sleek body sides, and light-up grille. The inside includes aspects that we believe the production car won’t be able to pull off, such as a translucent infotainment system and a tiny yoke-style steering wheel.

Practically speaking, the ZDX is the result of a collaboration between General Motors and Acura’s parent firm Honda; it will make use of GM’s Ultium battery. According to earlier sources, the Acura will be produced at GM’s Springhill, Tennessee factory beside the Cadillac Lyriq SUV. That gives us an idea of the ZDX’s powertrain: a 340-horsepower, rear-mounted electric motor in base form, with the prospect of a 500-horsepower, all-wheel drive variation being available as a refresh sporting a Type S badge.

Toyota is also trying to dabble a bit with the electric SUV segment. The new bZ5X is a fully electric SUV and a bit bigger than its younger cousin, bZ4X. Both are bound to hit the stores quite soon. This model has a three-row seating arrangement so at least 7 passengers can be seated. It will be the EV counterpart to the three-row seating Highlander SUV. It has a modern and sleek look, so we could say the designers did a wonderful job at giving it an edge in the styling department.

The dashboard will be fully digital which is a big plus. Although we don’t know the exact pricing or trim levels for the bZ5X, we anticipate that it will feature the very same XLE and Limited variants as the bZ4X. The bZ5X is most likely to be offered basic with a two-motor all-wheel-drive system, whilst that smaller model is available either with single- or dual-motor variants. The BZ actually stands for Beyond Zero which is to signify its zero carbon footprint moto.

The CX-70, a brand new two-row mid-size SUV coming from Mazda, is being added to the company’s roster of SUVs. It is likely to be more opulent than the brand’s more compact CX-5 and CX-50 SUVs because it is built on a new platform. In addition to an inline-six powertrain sporting a 48-volt hybrid power system which is similar to the drivetrains seen in numerous BMW and Mercedes models—a plug-in hybrid drivetrain is anticipated to be offered. Mazda hasn’t officially shown the CX-70, but we anticipate it to resemble the CX-60 for the European market while having a bigger body. Its inside will be larger than the CX-5’s and most likely be furnished with high-quality materials.

The upcoming CX-70 is the mid-ground between CX-50 and CX-9. It is a perfect crossover for every opportunity. The price is not given but it will be somewhere in the range of already existing Mazda SUVs. The powertrain should be able to produce over 300 horsepower and will be paired with an eight-speed automatic transmission. The plug-in hybrid is a bit more powerful with 320 horsepower. It has both rear and all-wheel drive. The interior will be a bit more luxurious to compete with other luxury SUVs on the market.

With the release of the new EX90 premium SUV, Volvo’s shift to an all-electric portfolio advances. Whenever it becomes available in 2024 as a model, it will be placed above the XC90 which is fueled by gasoline. It looks sleeker than the XC90 sans sacrificing iconic Volvo style cues like the “Thor’s Hammer” LED headlight trademark and vertically oriented taillights. Its styling incorporates components from the Concept Recharge show vehicle from 2021. According to the less potent and smaller C40 Recharge and XC40 Recharge SUVs, this system should have sufficient of punch for swift acceleration.

A 496-hp electric engine will come standard. This is a brand new model coming from Volvo so there are no previous iterations to compare it with. There will be three trims, Core estimated at $80000, Plus estimated at $90000, and Ultimate at $100000.  EV powertrain will have a dual motor setup and all-wheel drive. The weakest option will sport around 400 horsepower and the twin-motor performance version will have 500 horsepower. The zero to sixty times is rumored to be under 6 seconds for the twin motor, and the stronger version gets there in 4.7 seconds. 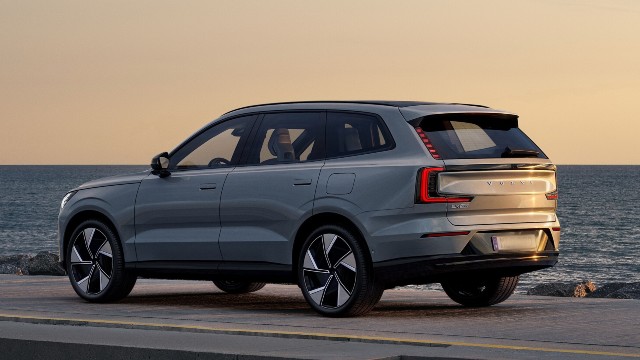 The new 2024 Toyota 4Runner is a marvelous vehicle. Just by looking at it, you can conclude that this is a rugged and sturdy vehicle. It is tailor-made for off-roading and has the right toolset for it. Although the current version is thought to be beneficial, there was some backlash when it first came out. Typically, the clients weren’t very taken with how it looked from the outside. The next 4Runner appears to address it with numerous design improvements, making the car significantly more appealing.

The 2024 Toyota 4Runner would probably rely on a current 4.0-liter V6 for its power, according to the most recent information. This reliable engine can produce 278 lb-ft of torque and 270 horsepower. With it, the 4Runner can reach its top speed of 114 mph and accelerate from 0 to 62 mph in around 7.5 minutes. Regarding fuel economy, its EPA rating is 17/21 mpg with 4WD and 17/22 mpg with 2WD. The transmission is made up of a single automated 5-speed gearbox.

The 2024 Polestar 3 is another fully electric SUV joining the current lineup. This is a daughter company of Volvo so they have a good pedigree. The sale should start later in 2023. The Polestar 3 is the company’s first SUV vehicle and the third model in its gradually growing lineup. The 3 will be produced alongside the S60 sedan and the upcoming XC90 SUV at Volvo’s new facility in South Carolina, making it the first Polestar to be produced in the country. There will be two options, Dual motor estimated at around $85000 and Dual Motor Performance at $90000. The Polestar 3 comes with a dual-motor drivetrain that comes in two different strengths.

The Performance trim has 517 horsepower instead of the base setup’s 489 horsepower. All-wheel drive is standard, but Polestar claims that the powerplant is rear-biased. The 3 can achieve  60 mph in just 4.6 seconds, according to Polestar, thanks to the 3’s more powerful electric motors. Every 3 will have an active damper adaptable suspension system, but the Performance trim also comes with a suspension that has been adjusted for sport. When we have an opportunity, we’ll test drive the new Polestar 3 and update this article with our thoughts on the ride.

Since 2016, the Macan SUV has been Porsche’s best-selling model. For the 2024 model year, a new all-electric version of the small luxury crossover is anticipated. The 2024 Macan EV could arrive with an electric-powered architecture that will also support the future Audi A6 e-Tron even though it will carry the Macan badge. The Macan EV’s powertrain is currently unknown, but Porsche claims it will have a substantially longer range than the Taycan, the company’s current electric car, which has an EPA-rated range of only 227 miles. Rapid charging times should be possible by utilizing the 800-volt electrical architecture of the Taycan. There will be three options when trims are concerned. There is Base which is estimated at $80000, S trim for $90000, and GTS trim for $100000.

This is on par with other luxury EV SUVs so we don’t think it is too expensive considering what you get. Official range estimates will not be available before the actual SUV is unveiled, but Porsche asserts that the electric SUV will have a much greater range than the Taycan, which has a maximum range of 227 miles according to the EPA. Like the Taycan, Porsche intends to offer two battery capacities, but given that the majority of American Taycan buyers chose the longer-range variant, it’s likely that just the larger battery cell would be imported to the country. The Macan EV is anticipated to make use of the Taycan’s 800-volt design, which enables quick recharging at up to 270 kilowatts.

The 250-mile range of the entry-level Equinox EV vehicles, which have a weaker battery system than other SUVs in the lineup, is estimated. While all-wheel drive reduces the expected range on those trims to 280 miles, all other models receive a bigger battery with a range of up to 300 miles. Every model has a DC fast-charging port, and according to Chevrolet, this may extend the battery’s range by 70 miles within just  10 minutes.