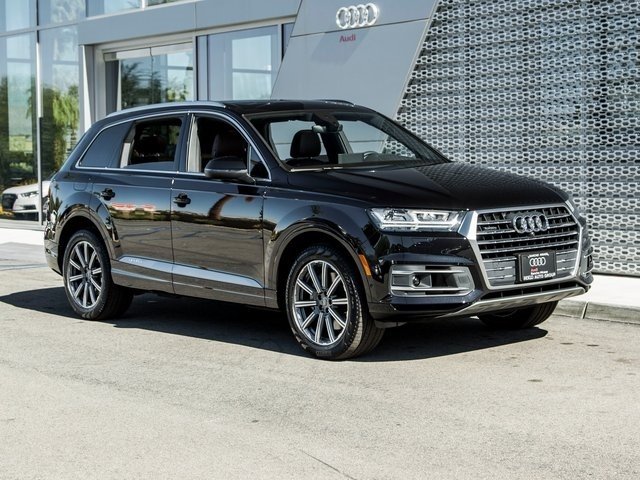 A prototype of the all-new 2020 Audi Q7 has been spotted during its testing wearing camouflage all over the body. However, based on the place of the coverings, we assume that the new Q7 will get some changes of the front and rear fascias while the interior will feature some new materials and updated infotainment system. The choice of the engine will remain the same but the Q7 should also offer a new plug-in hybrid powertrain.

The newest 2020 Audi Q7 will be powered by several types of engines and there should be one new engine in the offer. So, to start with the base 2.0-liter inline-4 turbocharged engine which will be able to make 248 horses and the torque of 273 pound-feet. The engine will work with an 8-speed automatic transmission and the all-wheel drive system will be standard for all the engines. It will be able to tow up to 4,400 pounds and will get 19 mpg in the city and 25 mpg on the highway.

The next unit will be a 3.0-liter V-6 supercharged engine which will use the same 8-speed automatic and AWD system. It will be capable of making 329 hp and 325 lb-ft of torque. Its maximum towing capacity will be limited to 7,700 pounds. As for the fuel economy, it is rated at 19 mpg in the city and 25 mpg on the highway.

Furthermore, the carmaker should also offer a plug-in hybrid engine for the European market. And this powertrain ill combined a 3.0-liter TDI diesel engine with an electric motor. However, we still don’t have the information about its performance.

The carmaker is currently testing its new 2020 Audi Q7, and judging by the spy photos, the Q7 will bring changes on both front and rear fascias. So, the front end is expected to receive a revised grille which now seems a bit smaller and less prominent and the headlamps will be restyled as well. They should also be offered with the new LED matrix lights. Around back, the Q7 will get new taillights and revised bumper while the profile will remain pretty much the same. Furthermore, the Q7 will feature new wheel designs also.

The cabin of the 2020 Audi Q7 won’t get some large changes but it will definitively be refreshed. So, this time, we can expect a new steering wheel, some minor changes in materials and an upgraded infotainment system.

The new 2020 Audi Q7 should be presented this March at the Geneva Motor Show. The price is not yet available but it should start at around $49,900.